The House Martin was named "Bird of the Year" for very good reason: its population numbers are in sharp decline. Since 1998, almost every second House Martin has disappeared from Austria. 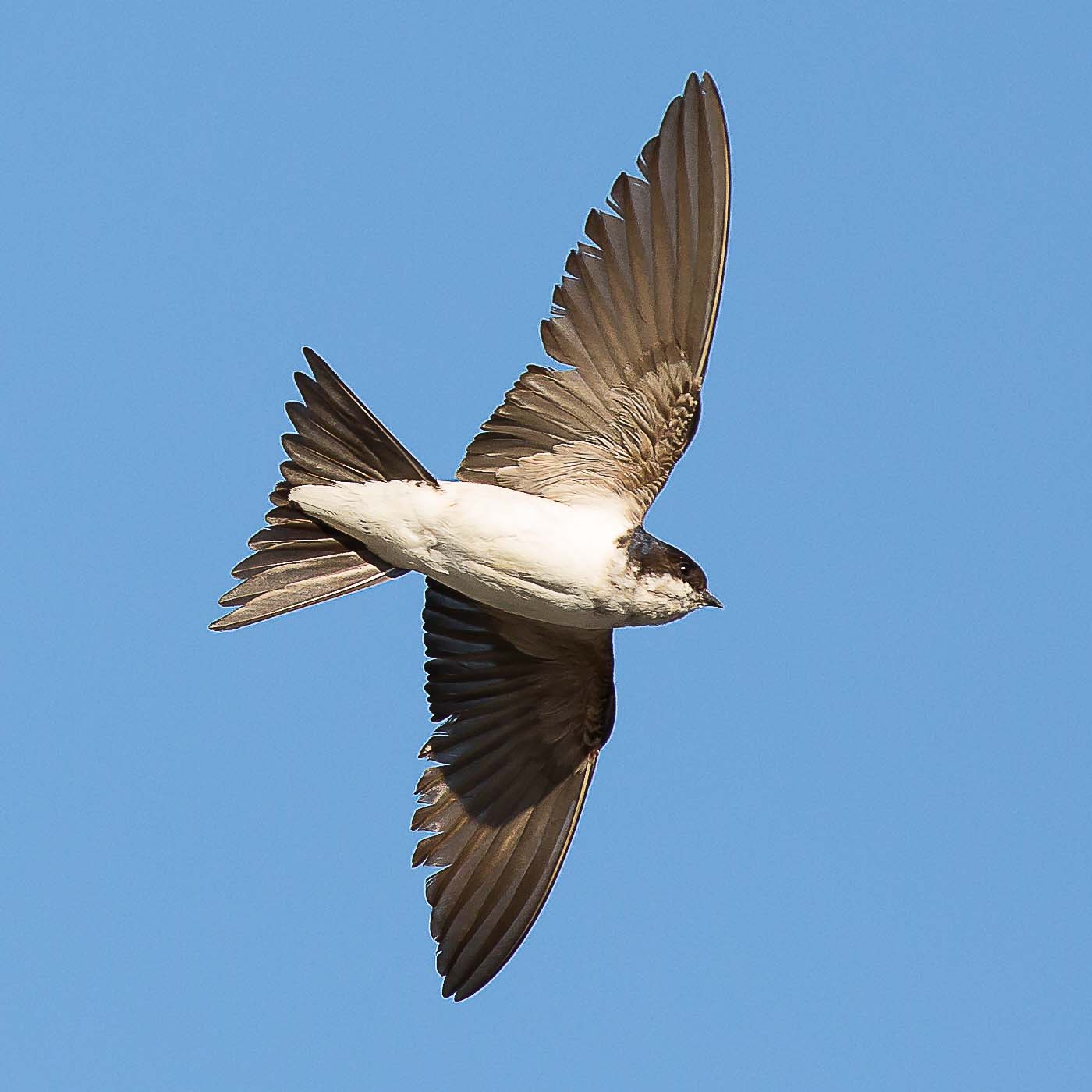 The House Martin is a 13-15 cm small passerine of the swallow family with a short, forked tail. Its crown and back are black with a metallic blue shimmer, while its wings and tail are dull black. The rump is bright white, as are the belly, throat and under-tail coverts. The feet are feathered white. Juvenile plumage resembles that of adult birds, but without the metallic sheen, and the throat and breast are light grey.

House Martins can be confused with juvenile Barn Swallows, whose tail streamers are not yet fully grown and therefore short. A look at the breast and the face provides clarity: Barn Swallows have a dark breast ring and a light face, but House Martins are white on their entire underside. Swallows are often associated with swifts while hunting in flight. Swifts are dark above and below and have slimmer, scythe-shaped wings. 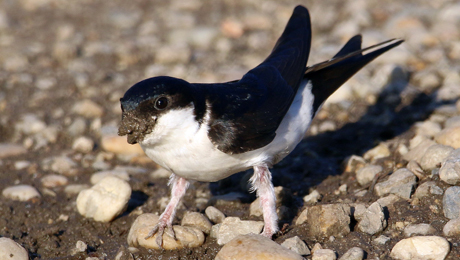 House Martins can also be supported in their search for nesting material with so-called "swallow puddles".

You want to create a "swallow puddle"? Click here for instructions (in german):

House Martins are very "chatty" with a babbling chattering song, performed by males and females either perched or in flight. Somewhat buzzing and hoarse chirping elements are also incorporated.

Their diet consists of flies, mosquitoes, aphids and other flying insects.

Their proximity to humans has earned swallows symbolic attribution: they are considered to bring good fortune and to herald the summer. In addition, swallows are extremely useful animals: they feed more than one kilogram of insects, including mosquitoes, to their offspring each breeding season and thus help to drastically reduce the number of mosquitoes in their environment.

Unfortunately, House Martins themselves are less fortunate nowadays, and their populations are declining. One reason for this is the decline of insects due to the use of insecticides and the loss of insect-rich habitats such as edge-strips, species-rich flowering meadows and wetlands, as well as increasing ground sealing. On the other hand, nests are often deliberately destroyed or swallows are prevented from establishing fresh colonies, despite swallows and their nests being protected by law, making it illegal to destroy them during the breeding season. 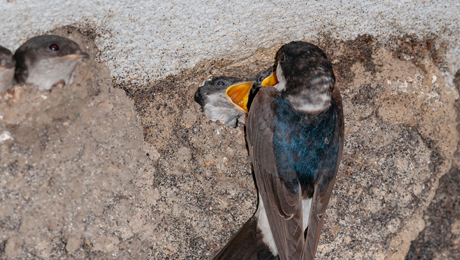 A House Martin at a nest.

As a colony breeder, the House Martin mostly constructs its nests under the eaves on the outer walls of buildings above a height of at least 2.5 metres. However, the species can still be observed at natural breeding sites on rock faces in some places (Tyrol, Carinthia). Depending on their location, their elaborate nests are closed quarter- or half-spheres with only a small opening. A rain-sheltered location and unobstructed approach are important. House Martins, like Barn Swallows, collect the building material for their intricate nests, preferably loamy soil, from open puddles or water banks. A pair of House Martins fetches up to 1,500 little lumps of clay with their beaks before their nest is complete. The nests are also regularly repaired during the breeding season, so muddy patches between April and August are particularly important for the birds. In fine weather, swallows can be seen high in the air, where they hunt for food.

The nest is reused in subsequent years and repaired if necessary. Artificial nests – which are commercially available – are also readily accepted. They should be mounted facing southeast, at a height of 2.5 metres. Swallow nests are protected by law and therefore must not be removed under any circumstances. Violation of this law may result in charges being filed by the respective district administrative authority (Provincial Nature Conservation Law & §222 of the Criminal Code – animal abuse, intentional killing). In most provinces this also applies beyond the breeding season. If the swallows' droppings on the façade are considered unsightly, the situation can easily be remedied with a so-called "droppings board": this board should be about 30 cm deep and placed 50-90 cm below the nest. Furthermore, colourful, species-rich flowering meadows and fallows, near-natural gardens and intact wetlands promote the swallows' food supply, as does the avoidance of insecticides. 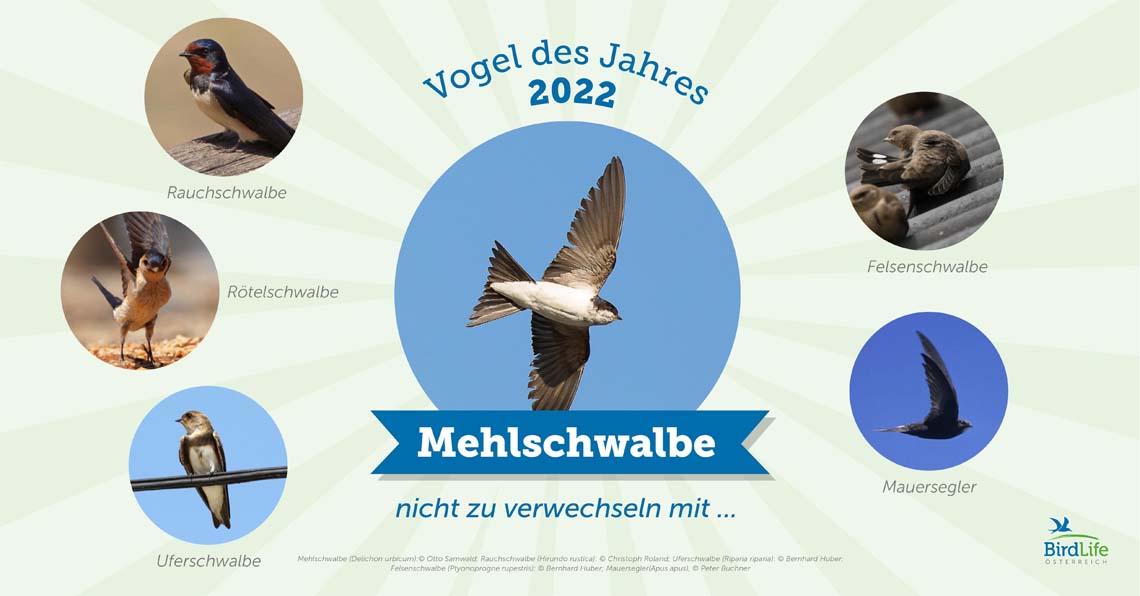